How is an inch defined?

Published: 7/16/2021 Last updated: 7/16/2021
How is an inch defined? What is the origin of this unit? Is there any legal definition of an inch, and if yes, how does it look? How does the relationship between an inch and other units look? If these are issues which you want to get to know better, this article is for you. 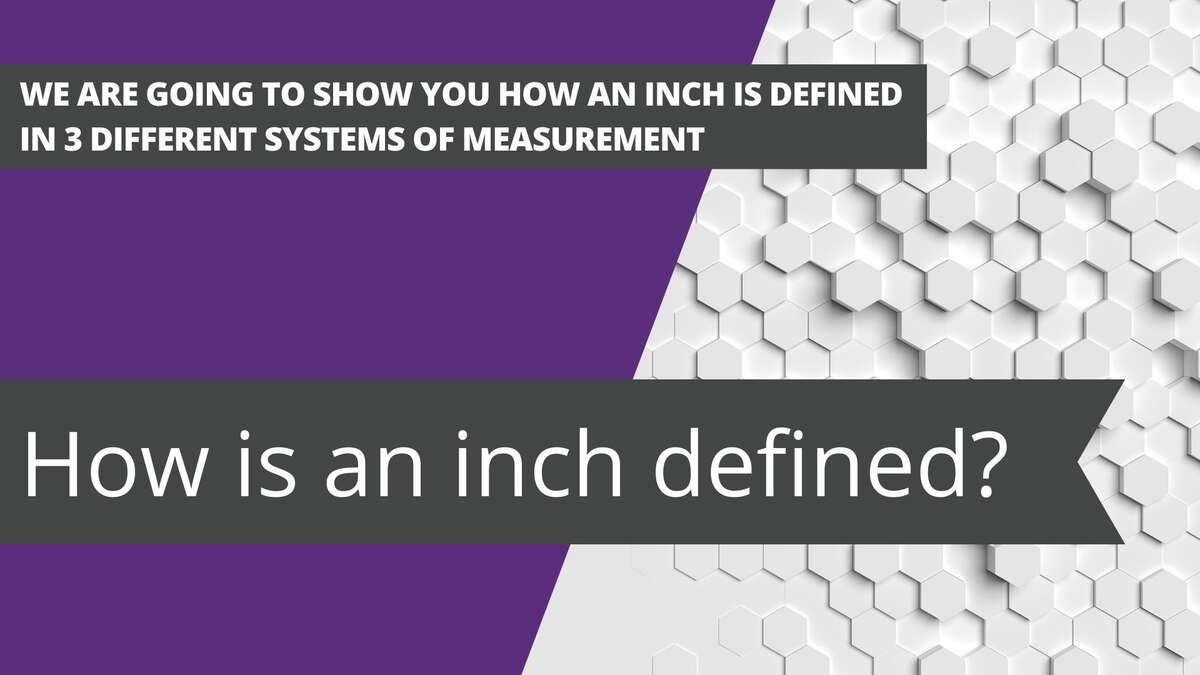 How is an inch defined? What is the origin of this unit? Is there any legal definition of an inch, and if yes, how does it look? How does the relationship between an inch and other units look? If these are issues which you want to get to know better, this article is for you.

How is an inch defined? This question is commonly asked by people who meet with an inch for the first time. If someone uses an inch in everyday life, know this unit quite well. But when someone uses another unit of length, from another system of measurement than an inch, understanding this unit can be a little problematic.

But don’t worry. After reading this article an issue of how an inch is defined will be clear for you.

We are going to show you how an inch is defined in 3 different systems of measurement. Two of them are similar, but one of them is different. Then you will also learn how to use this knowledge in practice. And at the end, we will show you how you can define an inch easier and quicker. So let’s move on and start with the main part of the article!

An inch – the origin of a unit

Before we move on to the values of an inch in different systems of measurement, you need to know a little about a theory of an inch. Thanks to this you will be able to quickly understand how this unit is defined and practical aspects of a definition of an inch will be easier.

What is the origin of an inch? An inch was mentioned for the first time in the 7th century. It was a long time ago. The reference about this unit was found in Laws of Æthelberht. One inch was defined as one of the various depths.

In turn, in 1324 in a statute of Edward II of England appeared the first definition of an inch. This unit was defined in comparison to a barleycorn. It looked as follows: "three grains of barley, dry and round, placed end to end, lengthwise".

Curiously, in Scotland, an inch was defined as the width of an average man's thumb at the base of the nail. This definition was assigned by King David I in Assize of Weights and Measures.

But years later it was noted that defining an inch with barleycorns is not sufficient. One barleycorn can be a little bit longer or shorter than the others, so the final result will not always equal exactly 1 inch. Such a view was represented inter alia by John Bouvier and George Long.

That’s why the first more precise definition appeared. They were slightly different from the previous ones. There were used exact values instead of description. In the US an inch was firstly defined as 25.4000508 mm, in the UK an inch was a little bit shorter and was defined as 25.399977 mm.

And at the end – the origin of the name “inch”. An inch is borrowed from the Latin word uncia. What is the meaning of this name? Uncia means one-twelfth (1/12). It is not accidental – 1 foot is divided by 12 inches.

You know a little about the origin of an inch and its history now. But how does the definition of an inch nowadays look? Let’s check it.

The definition of an inch 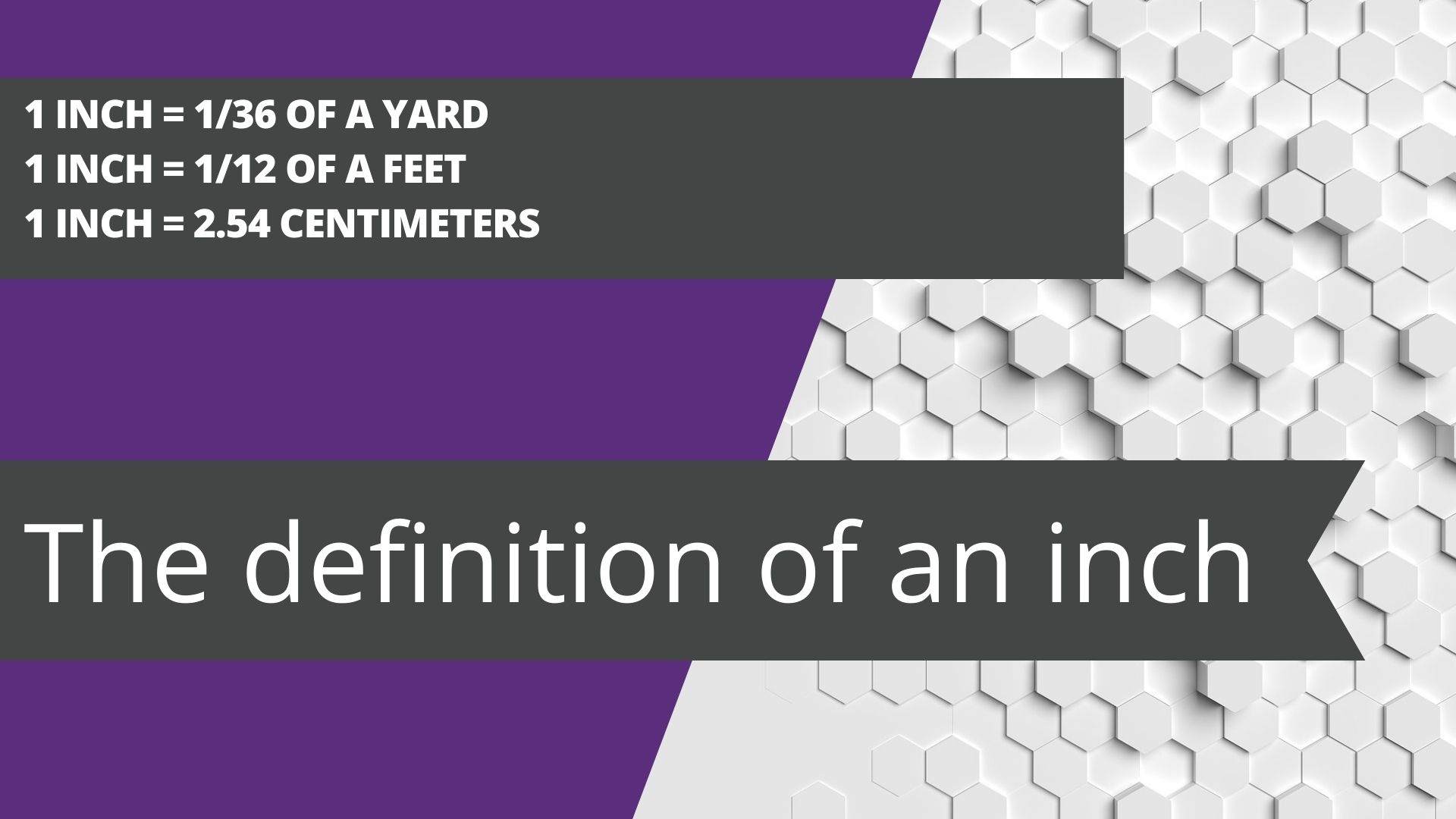 Nowadays you can see mostly 3 versions of a definition of an inch. And we are going to show you all of them.

First, an inch is frequently defined in comparison to a yard. The definition looks like this:

Second, an inch is also defined in comparison to another unit used mostly in the UK and the US – feet. The definition looks as follows:

We gathered also these 3 definitions in a table down below to make a quick cheat sheet for you:

How is an inch defined? These 3 values are the answer when it comes to exact values.

But what about an inch in light of systems of measurements? Let’s see it down below.

An inch – the US customary and Imperial systems of measurements

But don’t worry. These systems are almost the same, so you don’t need to remember how to define an inch in 2 different ways.

As you may know by the names of these systems, an inch is used as a basic unit of length in the United States and the United Kingdom. This unit is used there to measure small lengths, like waist or foot size, or carpet size.

But how is an inch defined in these systems? You will be not surprised by the values which we are going to give you down below. Why? Because these values were mentioned in this article yet in the case of inch definition. 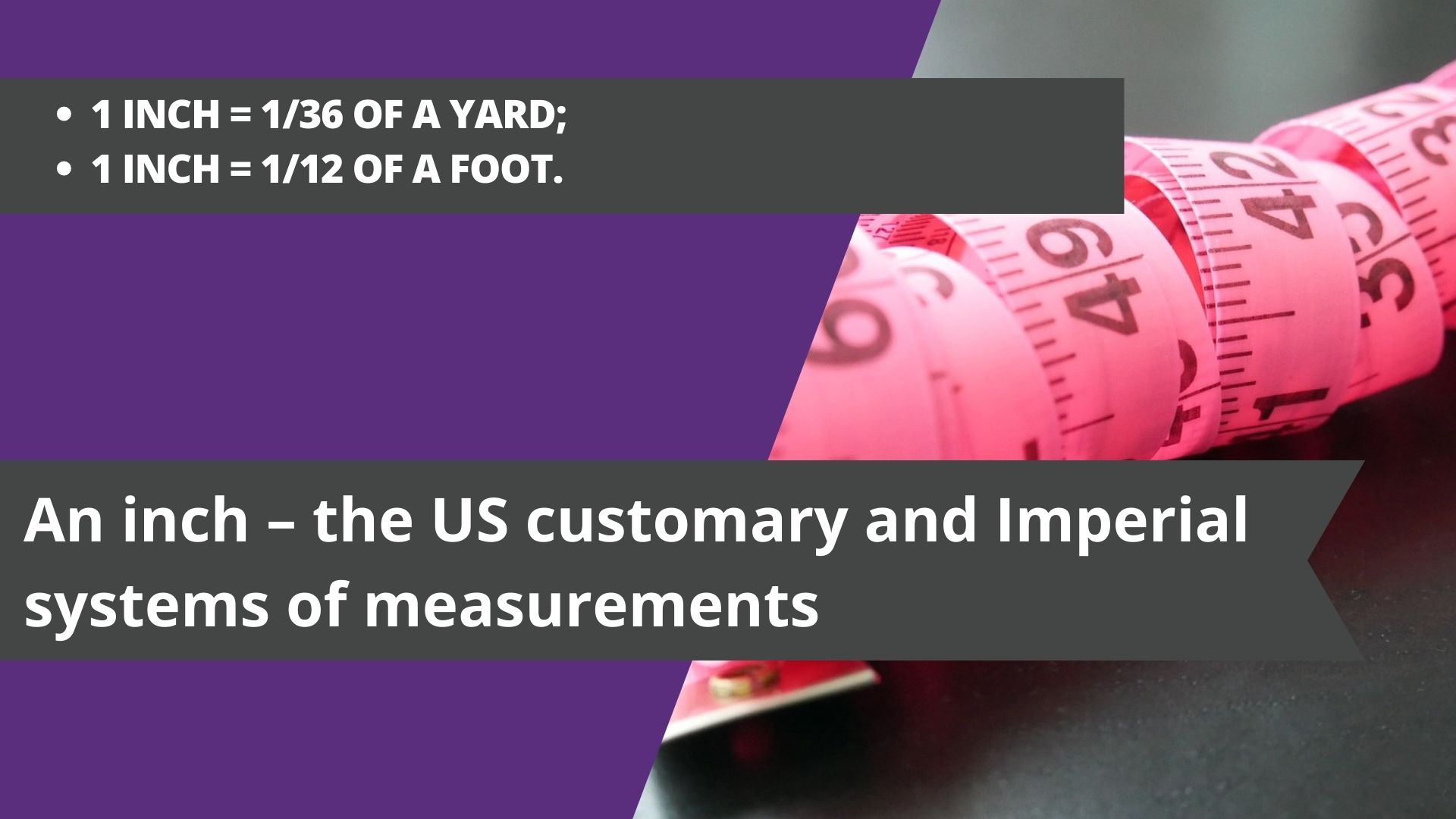 So let’s have a look at the most commonly used values of an inch in the US customary and Imperial systems of measurement:

So as you can see, 1 inch is a quite small unit of length. It is only one thirty-sixth of a yard and one-twelfth of a foot. In turn, it means in one yard they are 36 inches, and in one foot are 12 inches exactly.

So that’s how an inch is defined in these systems.

But, of course, these systems are not the only ones that are used worldwide. The most popular system of measurement, especially in continental Europe, is a metric system. How is an inch defined in this system? Let’s see.

An inch – the metric system

An inch is not used in the metric system. This system, also called the International System of Units (in abbreviation the SI), has its own units of length. In this system are also no yard or foot.

The most similar in value unit of length of the metric system is a centimeter. And we want to show you how is an inch defined in comparison to this unit. If you are reading the article carefully, you probably already know the answer. But if not, it is a quick reminder:

It is also possible to define an inch in comparison to a smaller and bigger unit of length of the metric system than a centimeter. We are going to show you how to define an inch with the use of a millimeter and a meter.

Have a look at the definition of an inch made using a millimeter (a unit smaller than a centimeter):

And now see the definition of an inch with the use of a meter (a unit bigger than a centimeter):

As you can see, the definitions above vary only in decimal points. That’s why they are quite easy to remember. Even if you don’t use the metric system in everyday life.

Conversion of an inch

You know now how is an inch defined. But how to use this knowledge in practice? How to make a conversion of an inch to another unit of length of any aforementioned systems of measurement?

We are going to show you a universal formula for making conversion of an inch. Thanks to this you will be able to convert any number of inches to any kind of length unit you need.

So how does this formula look? Let’s see:

The number of inches * the value of an inch in a unit which you want to get the result (how is an inch defined in another unit) = the result in another, picked by you, unit of length

Does it seem complicated? Unnecessarily. We are sure if you see a practical example with the use of the formula, you will change your mind.

So have a look at a practical example. For instance, you want to convert 5 inches to a foot. How does the equation look?

As you can see, we showed you the final result in 2 forms. One of them is an exact result given in a fraction, the second of them is an abbreviation (rounded off to 2 decimal places) given in decimal fraction.

It looks easy now, don’t you think? And in the way shown above, you can convert an inch to any other unit of length.

Do you want to define any number of an inch quicker and easier? See what we have for you in the next paragraph.

Define an inch easier with a calculator

To know how an inch is defined or how is any other number of an inch defined, you can also use a calculator. And we don’t mind the physical calculator or a calculator which you have on your smartphone. We talk about a dedicated tool.

An inch calculator is an online version of a standard calculator. So why is it better to use such a tool? It contains all formulas for an inch conversion.

It means the calculator knows how an inch is defined in other units of length. Thanks to this you do not have to remember any value of an inch definition. You can just enter the number of inches and pick the unit in which you want to get the result. And then wait for the result which will be shown in less than a second.

You just have to admit that it is the easiest and quickest way to define an inch of all methods which we have shown you in this article. So if you want to save your energy and time, try an inch calculator.

How is an inch defined – summary

Do you want to know more about using this knowledge in practice? Check how much you have learned – make quick math exercises about inches to cm conversion and define any number of an inch as a centimeter.